Short history of the honourable decorations

The history of the decorations which have existed in all times and all over the world could be summarized in four great titles:

They appeared as soon as people started living in community. A hierarchically structured organisation ruled by power soon developed. It was considered as quite normal that, in proportion to their merits, this elite was provided with marks of their higher rank: teeth of wild animals, feathers of rare birds, body painting and tattooing … In more developed cultures the rewards were mainly given to military people, who received metal chains, honorary weapons or a more or less important part of the haul.

The insignia and medals

In Athens the rewards consisted of promotions, proclamations, crowns and monuments.

With the Romans, who boasted a severe discipline in the army, the brilliant performances were stately rewarded by means of medals, mostly crowns of all kinds. The acclamation and especially the triumph were the greatest rewards that could be granted and they were strictly reserved to victorious generals. Depending on the case, they were accompanied by a laurel wreath, an ovation wreath or a triumph wreath. Other rewards as well were granted: a spear without metal peak; silver and gold bracelets, necklaces or armour decorations for cavalrymen.

In the Middle Ages one forgot the tradition of civil rewards; yet the predilection for decorations was a fact and this engendered the creation of knightly and military orders.

Those find their origins at the time of the Crusades. One wore a cross on the breast and moved to liberate the tomb of Christ in Jerusalem. The Crusaders who were member of these Orders could be distinguished from one another by the way they decorated their cross; that cross became red, yellow, green, white or black, according to their nationality.

At first, the Knights were mostly warriors of noble descent and also soldiers of more humble origin but from honourable and irreproachable families, with a firm religious faith, who had been ennobled because of brilliant performances.

Gradually the Grand Masters of all religious and military Orders were gathered around the crown and so they became National Orders turned by the sovereign into a political power, necessary to the state affairs. So In France we had the Orders of the Holy Spirit, of Saint Michael and of Saint Lazarus, in England the Order of the Garter, in Sweden that of the Seraphins, in Denmark that of the Elephant…

A prestigious Order of Knights will be closely linked to our provinces as it was founded in Bruges by Philip the Good, Duke of Burgundy, lord of Flanders, Artois, Brabant and Limburg, on 12 January 1430. This is the Order of the Golden Fleece which is granted to 24 knights who promise their leader and sovereign, their faithful and loyal services, both in war time and in dangerous times.

The Orders of Merit

Usually the members of an Order of Merit were classified in grades, the holders of which were distinct from one another by the different insignia and they got the title of Knight, Officer, Commander, Grand Officer, Grand Cross or Grand Ribbon holder.

The transition to a higher grade was not possible without having obtained all inferior grades. Some of these Orders boasted an inferior class with medals, palms etc… And very often the Orders of Merit involved a pension for the holders.

There is a great number of these Orders, among which the most famous are : l’Ordre de la Légion d’Honneur (The Legion of Honour) in France, the Order of the Iron Cross and the Order of Merit in Germany, the Victoria Order and the Distinguished Service Order in Great-Britain, the Order of the White Lion in Austria, the Order of Isabella the Catholic in Spain, the Crown Order in Italy, the Order of Oranje-Nassau in The Netherlands and many more…

Belgium has five Orders of Merit 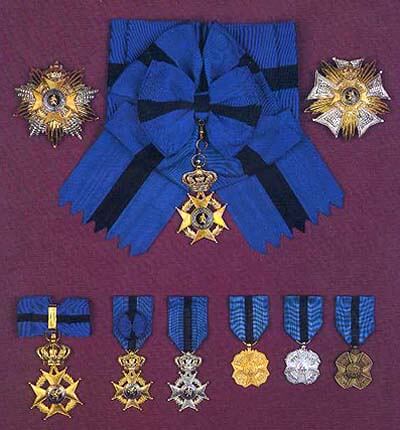 The Order of Leopold, civil and military (1832) and maritime (1934) categories: five grades per category. 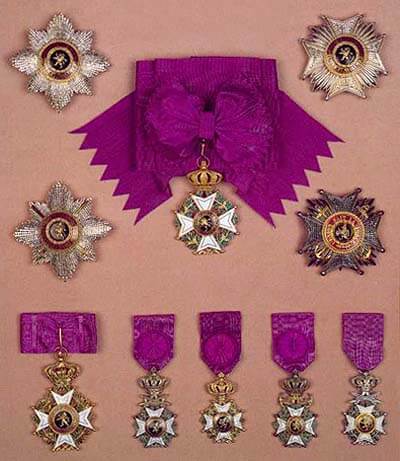 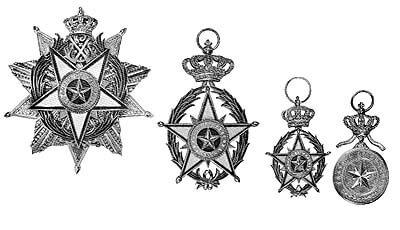 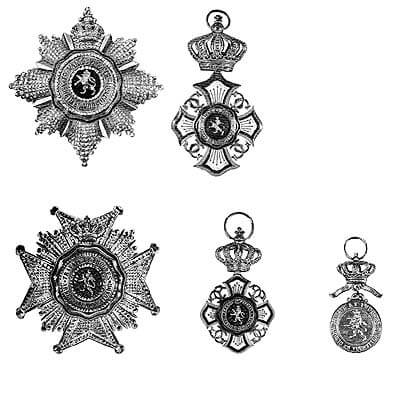 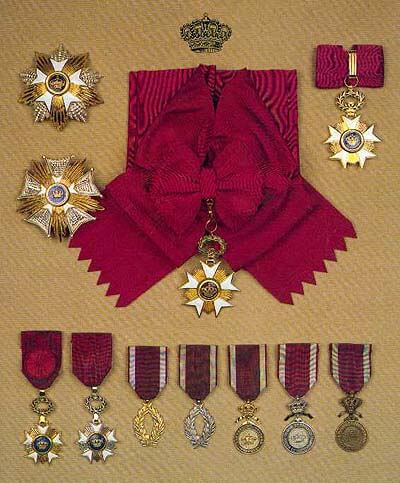 At first the military decorations and later the civil decorations get more numerous under the influence of principles hostile to the feudal character of the Orders.

André Charles BornéThe decoration usually consists of a badge which can be a star, a cross, a rosette, a ribbon, a plate, a string, a cap…

As to the decorations, one should make a distinction between: the official decorations, object of a law, a Royal decree or an Institutional decree; the semi official decorations which have a particular character as a kind of recognition of the rules or the statutes; the non official, private and fantasy decorations created by the boards of associations, federations, leagues, fraternities… 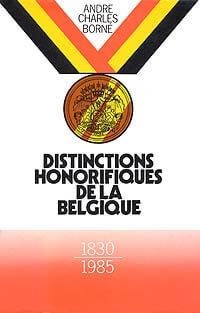